5 GIGS YOU NEED TO GO TO THIS SUMMER

Multi Instrumentalist, songwriter, singer, producer, videographer GREG CLIFFORD has just announced the launch gig for his new album “Quodlibet” which will take place on June 16th in The Cobblestone, Smithfield, Dublin. “A Drinking Pub With A Music Problem” – their words not ours.

Greg Clifford is a Dublin based independent musician. His style is an authentic synthesis of Indie-pop rock fused with electronic aspects and ‘classical’ guitar fingerpicking. Special guests on the night include  Geoff Raffe, Liam Corbett, Tiernan Jones, Simon Mullins and more. This will be a fantastic night of music, poetry and who knows what else. Go to the gig, buy the Album (€5 on the night), I’ve heard it – it’s awesome!!

Read more about Greg Clifford, his music and upcoming gigs at https://www.gregcliffordmusic.com/


Intimate Show in a Vintage Setting

Dublin based Pop/Rock musician IANN BRENNAN is set to take to the stage once again for his headline show in The Vintage Room of The Workmans Club, Wellington Quay, Dublin June 30th. Brennan completed a three week tour (as part of a three act showcase) of Ireland earlier this year and more recently took to the stage in Vicar Street to warm up the crowd for Irish Folk/Jazz singer Mary Coughlan. Currently putting the finishing touches to his debut album, Brennan will be treating the Vintage Room audience to a sneak peak of some of these new tracks. Special guests on the night: Elly D & Elga Fox.
Limited tickets available and judging from previous Iann Brennan gigs this is sure to be a sell out gig so get your tickets today!! 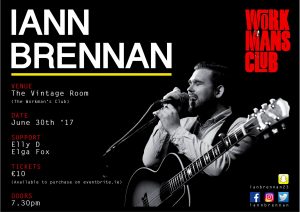 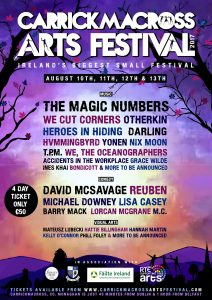 Renowned for it’s ability to intrigue and entertain people from the age of 8 to 80, CARRICKMACROSS ARTS FESTIVAL August 10th – 13th, returns this year with another stellar line-up of Art, Music, Comedy, Drama, Poetry, Film, Crafts and Artisan trade stalls.

This reasonably priced family friendly event spans four days and takes place on the grounds and gardens of Callan’s of the Bridge venue in the bustling market town Carrickmacross…. just 45 minutes from Dublin and 1 hour from Belfast.

The full line up is yet to be released but here’s what I can tell you so far….
Music acts include The Magic Numbers, We Cut Corners, Otherkin, Heroes In Hiding, Darling, Hummingbird and more (See Poster)
Comedy acts already announced are David Mc Savage, Reuben, Michael Downey, Lisa Casey and more.

Festival goers will also be treated to Artisan Trade stalls, a night of film, fun for the kids, visual art and so much more.

I’m keeping this one short and sweet because nothing I say will do it justice.

If you’re in Galway on a Sunday night – get yourselves to Roisin Dubh, go see JOHN CONNEELY INC. and thank me later.
Expect Blues, Jazz, Swing, Soul as well as some of Conneely’s original material, all orchestrated and driven by John himself who can be found sitting front stage with his acoustic while his 7 piece band provide a backdrop (or sometimes a wall) of sound like nothing I’ve heard before. The crowd is mixed which is really cool to see at a gig like this. Monday morning blues are the last thing on people’s minds here as they dance and sing along to the magic that is happening on stage.


Back To Where It All Began

Returning to where they played their first gig, Galway (Loughrea to be precise) based Indie Punk Band THE CLOCKWORKS play The Cellar, Galway June 17th.
I have seen these guys a number of times now – from stripped back acoustic shows to busking to full setup and each time they blow me away.  And i’ve been following their success since we met last summer so I’m delighted to feature them here.
Check out their song MAZDA to give you an idea of what to expect – this is one of my personal favourites. 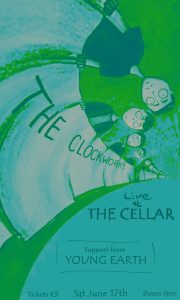 Tickets for the Cellar gig are €3 but should be booked asap as this is a limited space gig. Support on the night from Young Earth

All events are correct at time of publishing.  Please check with event organiser before you travel.